Ranged weapons consist of revolvers, shotguns, rifles, and bows. Each weapon has five different rarities: normal (1 star), copper (2 stars), silver (3 stars), gold (4 stars), and legendary (5 stars). They can be upgraded from one tier to the next using ore nuggets, with the exception of legendary weapons, which need to be bought from shops or looted from silver chests (low chance). Each type of ranged weapon benefits from a group of abilities corresponding to that type. 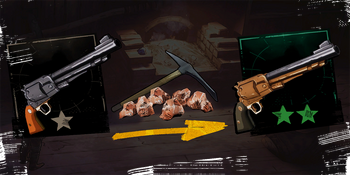 Rifles are powerful long-ranged weapons but have low attack rate.