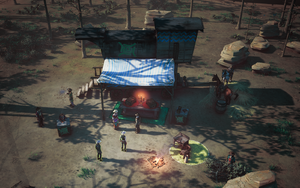 Random Encounters are events that randomly triggered while the protagonists are traveling on the world map.

Traveling through swamps and mountains will slow the protagonist down, increasing the chance for encounters.[1] Encounters on the East side of the map tend to have more powerful enemies, and they have higher numbers as well.

The following encounters only take place during specific Community Events.