Lost Fire Protector Journey is a main quest of Across Rivers.

Once Across Rivers arrives at Boulder Creek, he needs to eliminate all the Ridgebacks before the townspeople can safely come out. Once this is done, go to the spirit hall and talk to the clerics there and they point him to the Boulder Creek Mine. Also talks to the sheriff's wife and she asks Across Rivers to find her missing husband.

The Olvidado Bracelets' Lullaby contains clues to reveal the ghost town. Across Rivers need to find a place between a grove and three rocks, and stand there for a few seconds until the town appears. When stepping on the right place, a few musical notes are played.

Talking to West Standing Woman and she asks Across Rivers to gather a piece of copper ore and bark of the Mashiki tree. Copper ores can be found in many mines or tunnels and the Mashiki tree is found in the Sacred Grove, which is guarded by a few Ridgebacks.

The following outcomes are the direct consequences of Across Rivers' actions during his journey. This section contains spoilers for subsequent journeys. 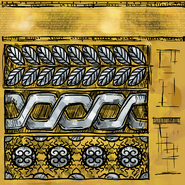 Texture file of the Olvidado bracelets.