Pigman Joe is a minor character in Weird West and an ally of Cl'erns Qui'g. He's an accomplished painter and a poet who is cursed and has to speak in rhyme. He's the author and illustrator of the book Pigman Joe's Tour du Weird West, which recounts his journey across the West.

When Ruth Bough attempts to feed Cl'erns' soul to the Soul Tree, Pigman Joe is there and is the only other pigman who can talk. He asks Cl'erns to meet him at this home, Joe's Hideaway, in order to discuss their next plan. When the two meet again, they devise a plan to destroy the Soul Tree and stop Ruth Bough. Throughout the Pigman Journey, Pigman Joe helps Cl'erns finding the three tap roots, which must be burned in order to kill the Soul Tree.

During the journey, Pigman Joe also reveals that he wanted to become a great poet, so he sold his soul to a Wraith. Because of that, the Soul Tree couldn't take his soul but he must also speak in rhyme at all time. Cl'erns can choose to help Pigman Joe, which starts The Bard's Bargain quest. If Cl'erns completes the quest, Pigman Joe becomes a Friend for Life, and is also available as a Companion.

If Cl'erns chose to free pigmen souls, Pigman Joe travels across the West, and there are news articles reporting his visits to various locations. Joe also collects snowglobes which he brings back to his home. The book Pigman Joe's Tour du Weird West is written about this trip.

Otherwise, if Cl'erns burned pigmen souls, he will be stuck at Joe's Hideaway together with Cl'erns. 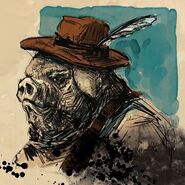