Ruth's Coven
Absolutionists
Oneirists, or more officially the Temple of Oneirists, are a faction of magic users whose goal is to guide the West to a better future. Through their dreaming rituals, they are able to see visions of the future, which are used to further their goals.

The Temple of Oneirists is a secretive organization and would severely punish those who interfere with their affairs.[1] They wear robes, shaved their heads, and consist entirely of women. To enhance their magical powers, oneirists sometimes carry bone icons, which are ribs of large animals carved with intricate geometric patterns.[2] They refer to outsiders as "dreamless" or "undreaming" ones.

Oneirists possess knowledge of magical plants and how to use them.[3]

Once a person swore themselves to the Temple, they become an Initiate and are given an initiate's knife. They must learn how to use it properly before learning how to cast spells.[4] They must also perform chores around the temples.[5]

In order to become a full-fledged member of the Temple, Initiates must perform their first dreamings, a ritual that would kill those who are deemed unworthy. Those who survive become Disciples.[6] Disciples are divided into two ranks, the Dreamspinners who wear dark blue robes, and the more senior Spiritwalkers who wear dark yellow-red robes. As Disciples, they continue to dream in order to gather visions and serve the Temple. It is suggested that while they dream, they enter the realm of the spirits.[7]

During combat, Initiates typically use initiate's knives and Shift Ability, while Dreamspinners and Spiritwalkers are armed with Quill & Medley Spiritstouch revolvers, and have access to more advanced oneirist abilities. Oneirists sometimes use Lightning in Bottles. If killed or incapacitated, they sometimes drop Sigil Stones which are used to open entrances to ancient temples.

There are rogue oneirists who were cast out for transgressing against the laws of the Temple,[3] and created their own factions across the West. The most prominent is Ruth's Coven, which is responsible for the creation of Pigmen. Others became outlaws and may appear in Random Encounters or end up being hunted by the Law. And then there is Sybil Branch, who betrayed her sisters and manipulates the affairs of the Absolutionists for her gains. 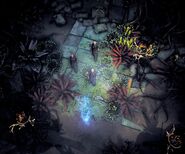 A group of fallen oneirists, all wearing grey robes.