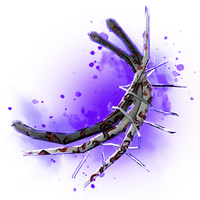 Nimp Relics are item found throughout the game that can be used to unlock Abilities. They are petrified claws of a species of ancient creature.[1] In the environment, they emit a faint purple glow. Locations of Nimp Relics that appear in the environment are fixed, but those are found in chests and containers are usually spawned randomly. They have high chance to spawn in ornamented chests, silver chests, mound caches-especially those in Treasure Hunt quests. Nimp Relics can sometimes be found in rock piles in dead-ends of tunnels, which can be blown up using explosives or Explosive Shells Ability.