Jane Bell was a famous bounty hunter, and is one of the five main characters in Weird West. Jane left behind her past, married Alonso Bell, and settled down in Bell Stead. At some point, they gave birth to their son Huck, and adopted a wolf whom they named Ava. Jane also has a mare named Calamity who used to travel with her when she was a bounty hunter. Calamity's ankle was injured prior to Weird West and was stabled at Albright Stead to heal up.[1]

One day, Jane is awoken by a terrible pain. Out of no where, a strange mark appears on her neck as if she is branded by cattle iron. At the same time, a gang of outlaws attacks the farm. Despite Alonso trying to fend off the attackers, he is overpowered and taken away, while both Huck and Ava are murdered in cold blood. Left with no choice and no time to mourne her son, Jane digs up her old gear, once again becomes a bounty hunter, and heads out to find her husband.

When Constance Driftwood visits Bell Stead, Jane and Alonso can be heard arguing about how Jane is not the same and how she can't let go of the past. Jane, on the other hand, still has nightmares and memories she shouldn't have, and she wants to get to the bottom of what happened. 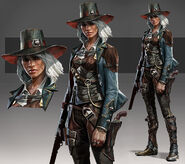 Jane without her hat.