Leader of the Temple of Oneirists

Anaïs, also known as the Mysterious Girl, is an ominous figure that appears throughout Weird West.

Anaïs first appears while Jane Bell is trying to track the Stillwaters and find her husband. For some reason, there are dead bodies all around her, and she refers to Jane as "Passenger", and says "This body suits you". At the end of the Bounty Hunter Journey, if Jane killed Alonso, Anaïs shows up again at Bell Stead, expressing astonishment that the Passenger would do such a thing.

Anaïs appears again in Elephant's Spine, and again with dead bodies all around her. She also refers to Cl'erns Qui'g as "Passenger" and asks him if he can feel. If Cl'erns responds by saying he feels plenty, she will say that it's unfair that he's the one who gets to experience feeling, after all he's "put [them] through". If asked how long she's been alive, she says that she remembers the Old Home language and the languages before that, and that she has "seen enough empires rise and fall that they feel regular as seasons".

If West Standing Woman is killed, Anaïs will be the person who assists Across Rivers throughout the journey. She shows him the location of the Dagger & Bones' missing caravan, and she also opens the hatch leading into the Olvidado gold mine since without West Standing Woman, Across Rivers cannot talk to the Olvidado children and ask them for help. Lastly, after defeating Wiindigo, Across has to bring the head to Anaïs and burn it, instead of going back to Thriving Place.

It is revealed that Anaïs is none other than the Authority, the leader of the Oneirists. She joined the Temple sometime prior to their discovery of Somnolence, and due to her immortality, she outlived all the senior members, eventually becoming their leader. 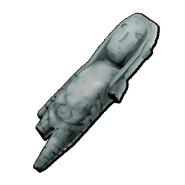 A vision of the Twenty-One, at the moment they gained immortality.