Abilities are active skills available to the five playable characters in Weird West, and they require Nimp Relics to unlock.

Abilities are divided into two main groups: class abilities which are unique to each character, and weapon abilities which are available to all. Unlike Perks, unlocking an ability on one character does not unlock the same ability on others. Activating Abilities cost Action Points, which can be replenished by sleeping or using Invigorating Tonics. Some abilities, once activated, can be deactivated to recover the AP cost. 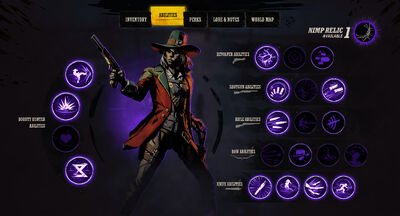 Across Rivers summoning tornado and lightning.

A silencer can be seen attached to the rifle barrel after using Sentry Silencer ability.

Using Right Between the Eye adds a scope to the rifle.

Sparks coming out of a shotgun's chamber after activating Explosive Shells.
Community content is available under CC-BY-SA unless otherwise noted.
Advertisement